We are going to Prague – Wij gaan naar Praag 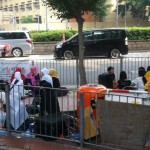 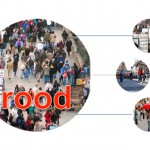 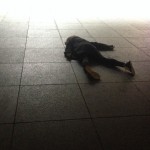 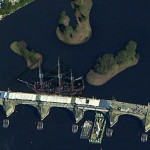 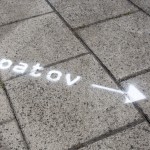 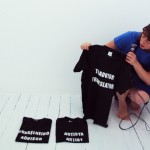 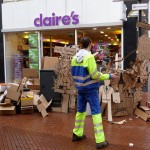 ‘All the world a stage’ is no longer a metaphor, but a reality itself. Today we witness a multiplication of staged realities. We are between realities. How do we cope with this complex reality? What strategies do we use? And how do these play out in urban public space?

Naomi Bueno de Mesquita has developed an application for smart phones which allows the public to collectively explore and map the communal environment in real time. The emphasis is on searching for hiding places: where in the centre of Prague can one hide or escape the tourist hordes?

Learn to get lost. Surrender to coincindence.
Be undercover and follow somebody else’s footsteps.
And draw (design) (with me) a new poetic survey of Prague through the colors of everyday clothes.

Carly Everaert allows the public to roam the city streets on the basis of method inspired by the Situationists. You follow someone through the city because of what they are wearing, for example a red skirt. You continue to follow the person in question until you encounter someone else wearing a red skirt. You stop after having switched subjects 7 times. At this point you listen to the description of a scene via a headset and observe the people in the street as if they were characters referred to in the audio text.

NOW ago: an attempt to capture the moment – Katja Heitmann

Katja Heitmann has designed an installation which allows participants in a public environment to create new images with video projections on transparent screens. The original material was recorded earlier at the same location, thereby producing a special doubling-up of time and space that creates a new perspective of one’s surroundings.

In the public intervention „Sculptig Fear – Obstacle“ Julian Hetzel creates a rupture in the accelerated flow of the city life. He proposes a temporary counter model by creating an interference through standstill. Hetzel works with a very simple proposition: people lying on the floor. This image is a challenge for the security and the public order since it generates an obstacle within the pulse of the streets. The existing codes of what is considered to be appropriate behavior are getting challenged. Value systems are getting interlaced and reality while fiction blend into each other. Everything is under control.

Light affects not only what we see, but how we see. Light shapes our relationships with the space and people around us.
The ability of light to attract attention and create a sense of drama is increasingly used to communicate a broad range of narratives in the public space. Vinny Jones aims to observe and document light which is designed to tell a story, and stimulate specific responses. She will focus on how the simultaneous transmission and reception of multiple light narratives directed towards different target groups shapes the public space in Prague. Her mapping questions are for whom the light in Prague is designed for? Does the targeting of specific groups leads to the exclusion of others? Which stories of the public space are highlighted, and which fall away in the shadows?

The city of Prague attracts more than 4 million visitors a year. After London, Paris, Istanbul and Rome itʼs the most visited tourist destination in Europa. With its historic city centre and hundreds of monuments that increasingly are used to entertain tourists, itʼs a typical example of a city that transforms more and more into an amusement park. His participation in the Dutch entry for the Prague Quadrennial 2015 focuses on researching and mapping those traces of Disneyfication of the city.

Rick van der Linden plans to organize a city excursion taking in different locations in Prague where one can speak of ‘staged authenticity’. This walk will include a visit to the famous Golden Lane that was recently completely restored to its ‘original’ state by a team of renowned film set designers.

As tourists walk along guided paths through ancient city centres, there rarely is a view outside of the offered framework. By offering visitors a new view on the city, a photomoment, they take home a little reality. The backstage of tourism. In a public environment all kinds of images constantly demand our attention. Different strategies are used to direct our gaze and put what we see into a context. In Prague, Maarten van Otterdijk will search for sites and settings that we are inclined to pass by without noticing. When evening falls Van Otterdijk literally sheds a different light on these locations.

Opatov, a suburb in the south-east of Prague, permeates the centre of Prague. The people will see and hear  about Opatov on many places in different times of the day.  At a certain moment  Opatov triggers the curiosity of the tourists, visitors of the Prague Quadrennial and the residents in such a way that they want coming to Opatov. Hieke Pars makes locations on the periphery of the city visible in the centre of Prague. She works closely with the residents of a Prague suburb, and asks them to use a flashlight to illuminate characteristic spots in their neighbourhood. Their images and stories are subsequently displayed in the centre of town so that the reality of the periphery subtly permeates the heart of the city.

As a performer Eva Schippers makes connections between various images, actions and objects and whatever medium is necessary to talk about the notion of EMERGENCY. ‘Emergency’, an explicit reason to make art and search for ways to translate her view into a growing archive of images, objects and stories [since 2010]. For Prague she will bring objects that are part of the archive Objects Of Emergency, to demonstrate and perform actions with them in public space. The actions and objects have the intent to engage the passant, lifting them out of their common structure for a moment with means such as mental disturbance and alternated environments. An emergent situation is not only something that should be feared, but can also be a moment to long for, a moment of clarity, realness and adrenalin. Every detail sticks in your memory in brighter colours, the rain is more wet, a bird flies by… It is all relevant and part of that moment. You have no time to think or calculate, you just are.

With his project ‘Continuo: Praha!’, Florian de Visser aims to expose one of the invisible motors of the current Prague 1 area; the packaging used for transport of products and souvenirs from all over the world to our shopping streets. In Prague 1, cardboard packaging arrives and disappears through back entrances. Florian will create an artificial public garbage collection moment in front of the shops, transforming the cardboard into scenes of several events from local history which have contributed to the present day environment of the street.